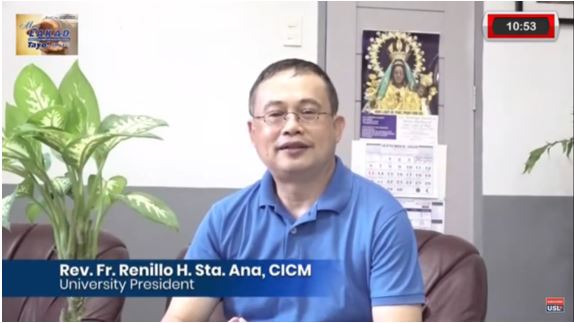 The University of Saint Louis, through the Office of the Vice President for Mission and Identity (VPMI), launched on Sept. 16 its online pastoral conversation program called “May LAKAD Tayo” via its Facebook page and Youtube channel to deliver spiritual content to its students, their parents, alumni, and other viewers.

The program has run seven episodes already as of Oct. 27. The first two episodes were held on Wednesdays but the succeeding episodes were streamed on Tuesdays. It is held at around 10:30 AM to 12 noon.

Translated in English as “We go for a trip,” LAKAD is a Filipino acronym for Luisyanong Alagad ni Kristo sa Asal at Diwa (A Louisian disciple of Christ in deed and thought).

For all episodes run, the Campus Ministry Office coordinated with the different host departments for the planning and implementation of the episodes, with the University Publishing Office, led by its director, Mr. Kyle Espiritu, manning the production aspect.

Preliminaries; an opening prayer; recap of a previous episode; live or pre-recorded creative performance numbers from current students, employees and/or alumni; occasional shout-outs or greetings for viewers; a game for viewers, awarding of certificates for guests; and a closing prayer complete the parts of each episode.

Vocation as call to holiness

For September, LAKAD episodes 1-3 revolved around the theme: “Christian Vocation: ‘Following of Jesus beyond the Usual.’”

The guests stressed that vocation is not exclusive to the religious such as the priests and nuns, but also includes those who chose married life and single life. 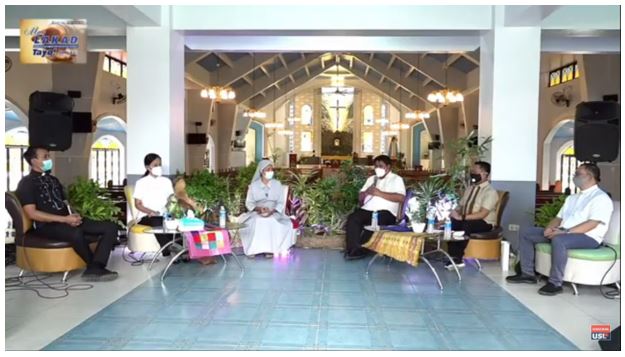 Asked of his advice on finding vocation, Rev. Fr. Edgar Baculi, Parochial Vicar of the archdiocese of Tuguegarao, stressed on having focus during one’s journey, such as when becoming a priest.

During the course of the show, Fr. Baculi answered a viewer’s question on how to grow spiritually when one is suffering from depression, after which he announced the availability of free counseling services at the St. Peter’s Metropolitan Cathedral parish with professional counselors to attend to those who need their services.

University President Rev. Fr. Sta. Ana also gave his advice to the youth who are experiencing depression. “Welcome God more into your life to fill in your emptiness,” he urged them.

Rev. Sr. Minerva T. Caampued, FAS, Franciscan Apostolic Sister Pastoral coordinator, shared that her most fulfilling feeling in her vocation is being assigned to the indigenous peoples in Sta. Ana, Cagayan. There, Sr. Caampued said, she has been advocating protection of the indigenous peoples and of nature, quoting Pope Francis’ words in the encyclical Laudato Si’: “Listen to the cry of the poor and the cry of the Earth.”

Similarly, Rev. Sister Rosettie Cruz Arroyo, Sisters of the Poor animator and provincial superior in the archdiocese of Tugegarao, said in Episode 2, “We have to take care of the environment, of ecology. Perhaps we have abused it…The environment is sick.”

Asked of her final message to Louisians, Sister Arroyo said, “God has called you, Louisians, and don’t be afraid. Answer with courage and with faith.”

Meanwhile, Rev. Fr. Augustus Calubaquib, vocation director of the archdiocese of Tuguegarao, stressed on one’s faithfulness to the calling of religious life, married life or single-blessedness. “Have time to listen to God’s call, and if you are sure of this call, answer generously to this call coming from God.”

Fr. Agcaoili shared on advocating the season of creation this time of pandemic relating it to the Department of Agriculture’s “Plant, Plant, Plant Program” by having a fishpond, poultry, and a garden called “Backyard farm school for the young, by the young.”

In talking about vocation, Fr. Agcaoili mentioned that parents and the community are sources of vocation. Meanwhile, he addressed the youth by saying, “You grow into a vocation. Don’t think that you are not good enough. God loves you. He can call you anytime.”

On the other hand, Sister Alarcon’s message for same group is “You have to enjoy your life as young people, but we also always listen and be attentive to how the Lord is leading us.” During the “Fast Talk” segment, she shared that her favorite motto is Jesus’ words: “Take courage; it is I. Do not be afraid.” (Matthew 14:27) 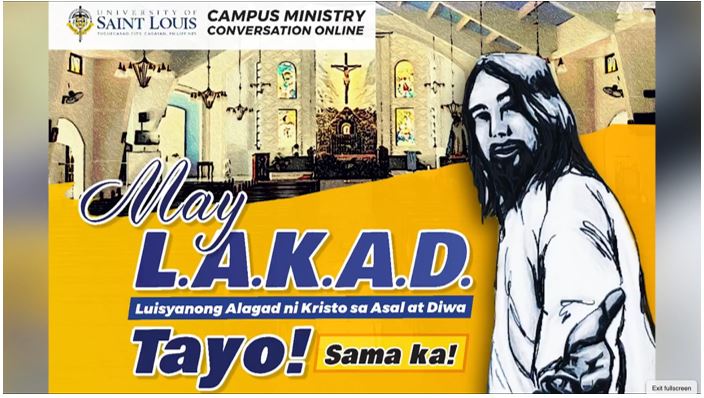 Mission in the Philippines

The second month run of the show revolved around the theme: “God’s Mission beyond the Usual,” with guests talking mainly about their mission locally or abroad.

Fr. Dollisen said that his mission is bringing police men and women closer to God. For his message to young Louisians, he reminds them that the Church needs saints. He also quoted St. John Paul II who said that the youth is the hope of the Church. Earlier in the show, he shared that Saint Louis Gonzaga is one of his favorite saints. Later, the Chaplain described USL’s patron saint as a model youth, a hero of a pandemic by taking care of the sick.

Meanwhile, Fr. Ordillos, when he was asked of his favorite verse, mentioned: “Do this in memory of me,” and explained the importance of the Eucharist – that it is the center and root of all Christian life. “It is the Eucharist that makes the Church,” he emphasized.

The October 13 episode saw further mention of Eucharist this time by Rev. Fr. Carlos L. Evangelista, treasurer of the archdiocese of Tuguegarao, who resonated the words of the newly beatified Carlo Acutis: “The Eucharist is my highway to heaven.”

Also, Fr. Evangelista stressed that witnessing is important in mission. “As was the tripod of Blessed Carlo Acutis’ Christian life – prayer, Holy Mass, and the Holy Rosary or devotion to the Blessed Mother. And his companions saw how he lived those,” he said in Filipino.

In same episode, Rev. Fr. Ernest Raymund Simeon, assistant parish priest of the Saint Vincent Ferrer Parish in Solana, Cagayan, related that the Blessed Virgin Mary and the CICM priests are his inspiration, with his life mantra inspired by the Marian response “Let it be done to me according to Your Word,” which he used as his ordination motto. He was ordained as priest after a stint as Theology instructor in USL.

The last two episodes in October presented about the mission work of four CICM priests abroad. They all said that they had language concerns in their mission stations or parishes. Each shared, however, what he considers his greatest accomplishment or most fulfilling moment in doing his mission such as tangible developments, learning a new language, and/or being understood and appreciated by their parishioners.

Episode 6 which streamed on Oct. 20 featured Rev. Fr. Rene Cabag, CICM, who was a former missionary to Cameroon, and Rev. Fr. Randy Gonzales, CICM, who is currently based in North Carolina, U.S.A. 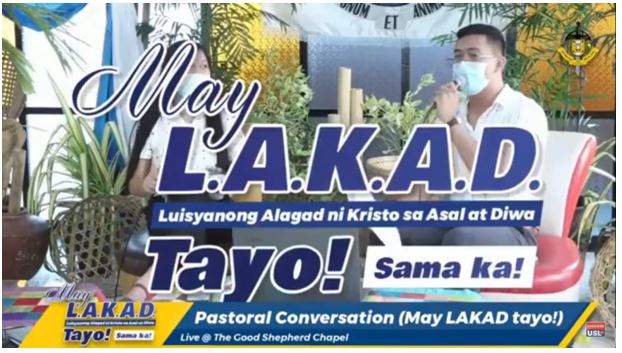 Now the CICM Philippines’ vocation director and a professor in Maryhill School of Theology (MST) in Quezon City, Fr. Cabag advised on adopting a collaborative approach to create an impact especially during the health crisis. “Realize that we cannot solve all these issues… Believe also that we need other people, other institutions, communities to realize things.”

He shared that MST had partnership with the network of different CICM entities, the Catholic Bishops’ Conference of the Philippines (CBCP), other congregations and groups like Caritas Philippines’ Kindness Center, USL, and other institutions and groups to respond to the immediate needs of marginalized communities especially within Metro Manila.

Meanwhile, Fr. Gonzales said his visibility as a missionary during the pandemic is manifested through conduct of masses at home or in the Church. He also disseminates information and announcements via social media about COVID-19 testing and distribution of relief items by organizations. “Networking is one of the biggest efforts that created impact and support to our communities in Sta. Clara and Wallace, NC,” he said.

The last Mission Month episode was streamed on Oct. 27, with Rev. Fr. Adrian Louie Z. Atonducan, CICM and Rev. Fr. Armando Romero, CICM as guests. The former is based in Haiti, the latter in Japan.

Fr. Atonducan said his most fulfilling moment in doing his mission in Haiti is the time he has been in said country. Going literary, he quoted from the French novel The Little Prince: “It’s the time that you spend with your rose that makes your rose unique, [important].”

Fr. Armando Romero, CICM, on the other hand, serves in the Kakogawa Catholic Church under the archdiocese of Osaka in Japan.

He expressed pride as a CICM missionary abroad. “You’ll find a family everywhere…There’s a new family here, my CICM family, that is willing to journey with you. We are connected around the world through our prayers… That’s also one that makes me proud as a CICM missionary. One heart, one soul.”

Asked of his message for the entire Louisian community, he said, “I congratulate you for having this kind of platform [May LAKAD Tayo] to continue reaching out not only to the Louisian community but also to the rest of the viewers who are able to watch this one because this is an [opportune] time in this pandemic that we have – sharing the good news or the Word of God or doing our basic mission to become missionaries…” 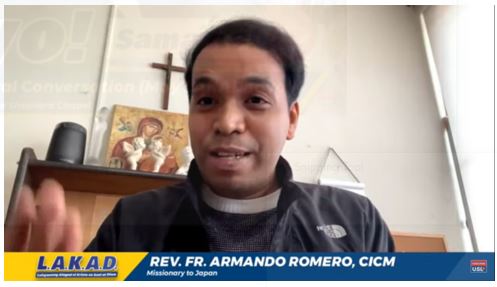 Meanwhile, for their added participation, students enrolled in Christian Faith Education subjects in the college submit reflection papers to their instructors after watching a particular “May LAKAD Tayo” episode pre-assigned to them for viewing.