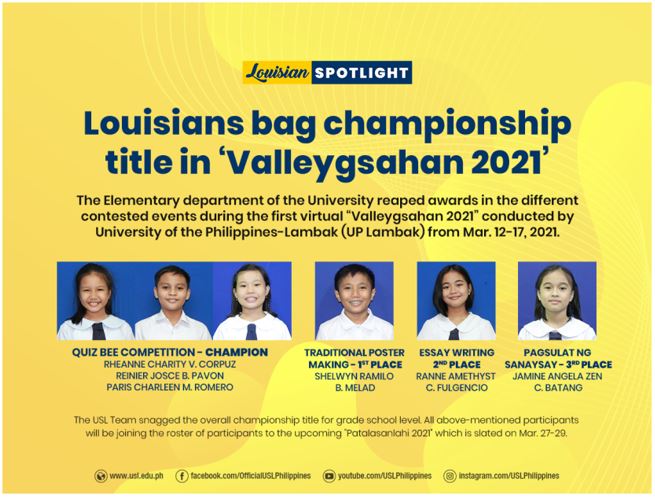 The Elementary department of the University reaped awards in the different contested events during the first virtual “Valleygsahan 2021” conducted by University of the Philippines-Lambak (UP Lambak) from March 12-17, 2021.

For group category, the USL Team, who is composed of Rheanne Charity V. Corpuz, Reinier Josce B. Pavon, and Paris Charleen M. Romero, clinched top spot in the final round of the Quiz Bee competition via Discord app.

All above-mentioned winners will be joining the roster of participants to the upcoming “Patalasanlahi 2021” which is slated on Mar. 27-29.

With this year’s theme: “Pannubok: Ang Kabataan sa Harap ng mga Banta ng Kasalukuyan at Kinabukasan,” the event is an annual regional level interscholastic competition which aims at upholding awareness on pressing issues and social concerns among youth in the region.

The event also aims to harness the intellectual and creative prowess of learners in the basic education level.

UP Lambak is an organization of UP Diliman students from the Cagayan Valley Region.