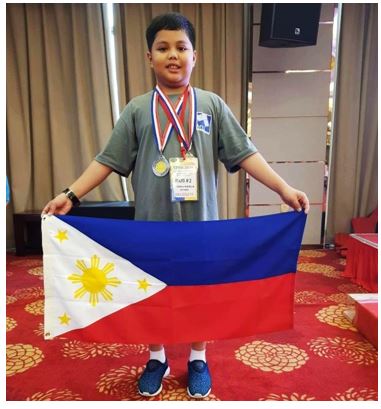 The Grade IV pupil notched bronze medal in the individual competition and clinched another bronze in the team competition.

As a scion of the Mathematics Trainers’ Guild (MTG), Philippines and with noted logical-mathematical skills, Ayson was chosen to participate in the said international math event joining other representatives from the Philippines.

“I have been training [very] hard for this. Others may say [that] I am too young, but honestly, I have set my goals. It feels good to finally succeed in achieving what I have prayed and worked for. Bringing honor to the country through this competition makes me feel even more proud as a Filipino,” Ayson said.

The Philippines, China, Hong Kong, India, Indonesia, and Russia partook in the CPMO.

The CPMO is Ayson’s second international participation. He reaped merit award in the International Mathematics Wizard Challenge (IMWC) in Jakarta, Indonesia on May 4-7, 2018.

The Department of Science and Technology (DOST) Regional Office 02 awarded Ayson a medal and a certificate as recognition of his achievements.