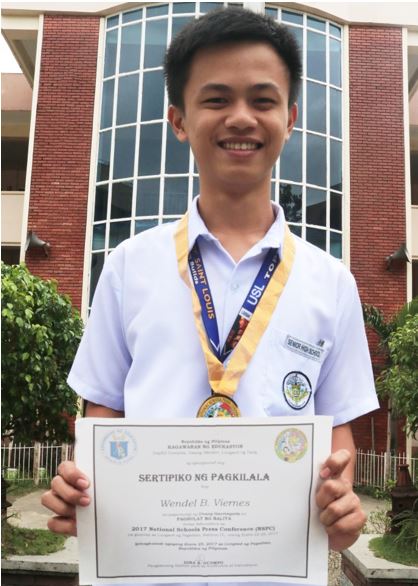 STANDING TALL AND PROUD. Viernes shows
off his medal and certificate. In the
background is the USL Charles Pieters Building.
His acclaimed news focused on the significance of passing the Freedom of Information (FOI) Bill as discussed by Ms. Malou Mangahas, Executive Director of the Philippine Center for Investigative Journalism (PCIJ).

PCIJ, an independent, nonprofit media agency specializing in investigative reporting, has been in existence since 1989, and today, one of its key objectives is the legislation of the FOI bill in the Congress, after President Rodrigo Duterte passed the executive order of mandating full public disclosure of all offices under the executive branch.

The FOI bill, once enacted, will require access to particular documents and data in all levels of government, penalties for public officials and employees who deny such access, and other components that will guarantee transparency, accountability, and people’s participation.

Viernes has been a writer in his school publication since elementary. His winning in the national level was a “first-time” achievement.

“I was too nervous during the competition because I was representing the Cagayan Valley region as well as USL,” he said in an interview.

In order for him to gather data, he had actively listened and written down notes of the delivered speeches and lectures of speakers during the opening ceremony.

“I didn’t expect that a speech news article would be written for the competition. But I felt assured because I had gained information and had written down quotations from the speakers, so that made my news item substantial and relevant, I guess,” he revealed.

Before joining the national competition, the Department of Education Division Office of Tuguegarao City and Regional Office conducted training to prepare the region’s young campus journalists.

Viernes is currently pursuing the Accountancy, Business and Management (ABM) track. Presently a senior writer for the Blue and White, he was also the school paper’s editor-in-chief during his junior high school years.

The champion’s coach was Mrs. Desiree O. Callangan, the Blue and White moderator.