With the inclusion of Robotics in its curriculum, the Junior High School (JHS) held a culminating activity called Robolympics 2018 on April 11 to May 3 at the Robotics Laboratory and JHS Quadrangle.

The activity aimed to awaken among the Grades 7-10 students a greater interest in Science, Technology, Engineering, and Mathematics (STEM).

It also aimed to develop the students’ intellectual and social abilities through Robotics and to foster in them understanding, fellowship, solidarity, peace, good will, cooperation, respect, and self-reliance.

In the Asteroid Challenge, students use measurement and mathematical reasoning skills to plan and carry out a series of movements for their robot, with strict limits on the number of attempts allowed to test or run the robot.

Sumobot is a head-to-head match of robots following the basic system of traditional human sumo matches. It is fought between two teams, each team having three to four members. The match starts at the referee’s command and continues until one team wins two out of three rounds.

The objective of the Ringmaster Challenge is for participants to attain the highest score by scoring Colored Rings on the Floor Goal and on the Posts, by having Uniform Posts, by emptying Starting Pegs, and by releasing the Bonus Tray. In this challenge, teams complete the challenge in 60 second-long Driving Skills Matches, which will be entirely driver controlled to score as many points as possible. This match consists of one Robot and one VEX IQ controller.

The Robomaze Runner Challenge is where students use mathematical reasoning and programming skills to navigate the maze. The player with the shortest time to finish the maze is declared winner. 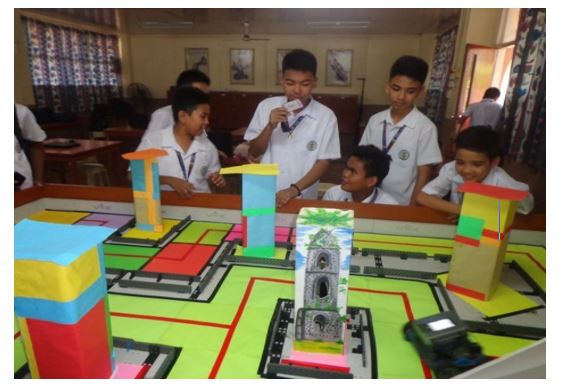 First Eduspec, Inc., through Mr. Genard T. Sonido, Robotics teacher from the company, initiated the conduct of the Robolympics, in coordination with the JHS Mathematics Coordinator, Mrs. Rosel Gannaban. Some Math teachers became the referees or game managers during the event.