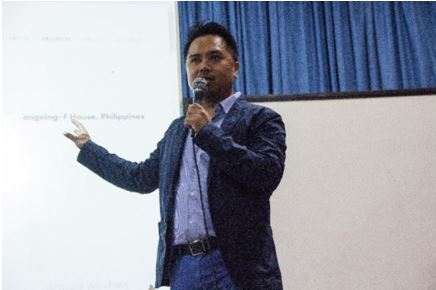 Constantine Ronquillo, Assoc., AIA, an international architect and urban designer, shared his relevant experiences to the BS Architecture students of the University of Saint Louis (USL) on Wednesday morning, June 20 of this year at the Bulwagang Andres Nowe.

Dr. Emmanuel James P. Pattaguan, Vice President for Academics, introduced the architect, informing that Ronquillo was one of his students in high school.

Arch. Ronquillo started his lecture by reminiscing both his successful and challenging moments as he ventured in the fields of architecture and urban designing.

Ronquillo noted in his lecture that upon entering the world of architecture, one must embrace whatever opportunities and challenges he/she may be encountering in the field.

The architect also shared that to be in the field is not a big joke. At many times in his life as an architect, he said he has experienced juggling between his work and family. Ronquillo even recalled that he sleeplessly worked at night just to finish his designs and meet deadlines, which to him are just part of himself and his lifestyle.

Working as an international architect and having been involved in major projects in different countries, Ronquillo emphasized that architects must consider physical, geographical and cultural aspects of a certain country before doing an architectural work or design.

The architect presented today’s greatest and promising architects together with their architectural works. He likewise introduced to the students some of his projects and software he uses and encouraged them to familiarize themselves with at least one software.

In his lecture, Ronquillo mentioned that most of his architectural style and design techniques are inspired by “minimalist concept” and “parametric architecture.” He stated that his designs are mostly aligned with ultramodern concept, postmodernism, and sustainable development.

“You are not here to build small houses. You are here to build big buildings,” the architect told the students. “You have to be confident with your ideas, with what you believe in, and most especially with yourself.”

He also said that to be a great architect, one does not need to learn everything but just the essentials.

Ronquillo ended his lecture by giving more qualities that an architect must possess. “You have to think creatively. See tangible things and imagine intangible ideas.”

“Architecture itself is a lifestyle, an approach in which you can develop your problem-solving skills. All you have to do is to train yourself, train your mind to be in the zone,” Arch. Ronquillo concluded.

Arch. Ronquillo is a 1995 high school alumnus of this University, then a college. After high school, he enrolled at Far Eastern University (FEU) Manila and took up Bachelor of Science in Architecture. In 2002, he graduated in the same university and was awarded Best Thesis Shortlist.

After completion of his undergraduate studies, he worked in several architectural firms which took him across the world. Years later, Ronquillo decided to enroll his master’s degree and took up Master of Architecture in Urban Design-Post Professional at Savannah College of Arts and Design (SCAD) in Savannah, Georgia, U.S.A. In 2011, he graduated and was selected as the sole recipient of the Outstanding Achievement Award for Urban Design and Architecture.

Ronquillo is currently working as project designer at CT HSU + Associates, an Orlando-based architectural planning and design firm in Florida. This firm focuses on various medium- and large-scale projects such as convention center renovations and school campuses.

Ronquillo has been exposed in the architecture field for 15 years with diverse international project experiences across Asia, Europe and the United States. Some of the projects that he had involvement in are: Amway Arena, Orange County Convention Center (OCCC) Food Courts, and Orange County Public Schools (OCPS), all in Orlando, Florida.

Check these links to know more about Arch. Ronquillo and his architectural designs: http://www.rrrchitecture.com/about/ and https://issuu.com/cipyboy/docs/portfolio_ctronquillo.