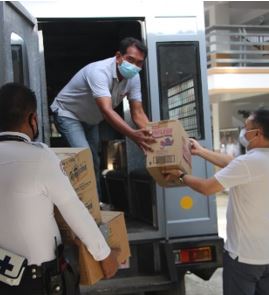 The initiative on assisting communities affected by the flooding in the year 2019 has crystallized into the “Hating-Kapatid” Program of the University of Saint Louis (USL).

It was dubbed such because part of the allocation spent for the relief operations was taken from half of the year’s budget for Christmas party and from the University’s mission collection fund.

This was the same program that delivered food packages to identified individuals and to stranded Louisian students in Tuguegarao City during the lockdown brought about by the implementation of enhanced community quarantine.

Thereafter, Hating-Kapatid Program also took notice of the need to extend assistance to the inmates at Cagayan Provincial Jail (CPJ). This ensued after Mr. Nestor Cabrido, director of the Community Engagement and CICM Advocacies Office (CECAO), visited the said facility.

The exchange of dialogues between Mr. Cabrido and Mr. Catalino Arugay, the CPJ warden, brought to the fore the plight of the inmates. The cutdown on the number of visits as a consequence of the pandemic has affected them. The increase in transportation expenses accordingly diminished goods received from their families.

The CECAO facilitated the handing out of goods to the said inmates on Aug. 3, 2020. These were received through a CPJ representative who came over to the University.