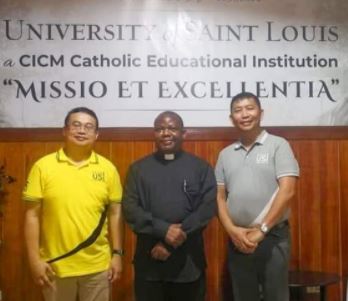 Members of the University of Saint Louis (USL) administration and some other employees welcomed Rev. Fr. Charles Phukuta Khonde, CICM, superior general of the Congregation of the Immaculate Heart of Mary (CICM) on Tuesday night, March 10, at the Bishop Wenceslao S. Padilla, CICM Learning and Mission Hall. 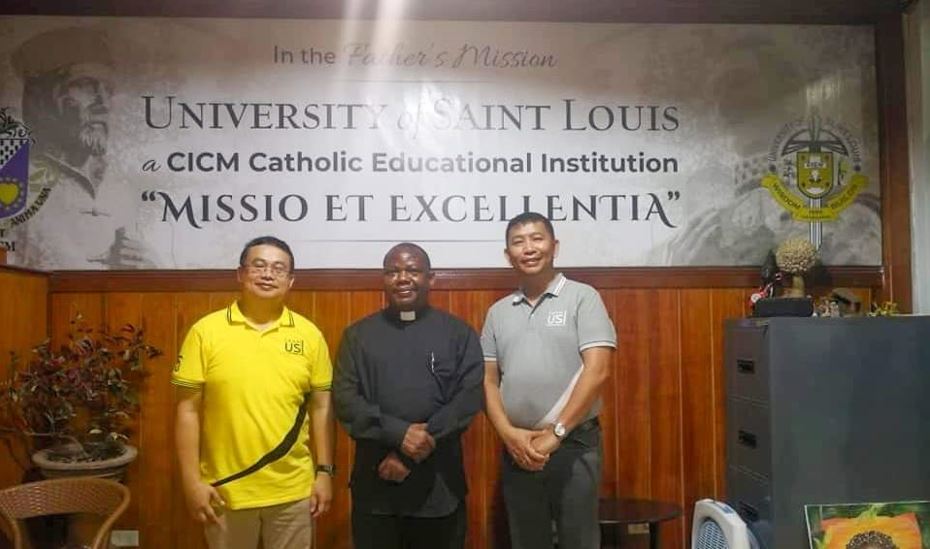 In his message, Fr. Khonde expressed his appreciation to the University for its efforts not only in inculcating good values to its learners but also in upholding the CICM mission.

“That solidarity, that compassion, that attention to the needs of one another especially the young ones who come here to get educated, to help them grow, and so I sincerely appreciate your collaboration, your participation in the CICM mission,” Fr. Khonde said.

The 54-year-old superior general emphasized that everyone must walk together and try to be attentive to reach one another towards catering both young and adult children.

“They need guidance. They need models. They need examples. All of us are in fact entrusted of that mission. We try to see not only to give numbers and words here in the head but also how can we form the hats of those young people. And that in itself is a ministry—it is not a joke—it is a ministry when you have to form those hats of young people who come here.”

Fr. Khonde likewise said that it is a beautiful mission to give and pass knowledge, but he stressed that everyone must involve himself/herself in the formation of the image of the children towards becoming good people for their families and for the society.

“So, having said that, I can only promise you that I will not forget this moment that we spend together. You will be in my prayers, and I hope that you also pray for the CICM missions,” he added.

Fr. Khonde thanked the Louisian community for their love and care to and appreciation and acceptance of Fr. Neil.

“But to be here by himself, it is easier when he is loved, cared, appreciated and accepted—and that what keeps us moving.”

“Many of us live in faraway from the mountains in Guatemala, Haiti, Congo or Cameroon. But again, with the help, support and appreciation of the lay people, the ministry is possible,” Fr. Khonde said.

The superior general ended his message by giving his words of gratitude to the University for its commitment to teach young people as well as for the care and compassion that all Louisian educators are extending to their students.

Father Khonde was born on Dec. 24, 1965 in Boma, Democratic Republic of the Congo. He joined the Kinshasa province of the Congregation of the Immaculate Heart of Mary on Oct. 7, 1989 and took his first religious vows a year later.

In Sept. 1993, Fr. Khonde was assigned to the U.S. province where he continued to study English and Spanish.

On May 8, 1999, Father Khonde was ordained to the priesthood at St. Martin de Porres Church. His first appointment was in Our Lady Queen of Angels Church where he served as parochial vicar until June 2002.

In 2006, Fr. Khonde received his six-year term appointment as secretary general of the CICM in Rome. He had a two-term appointment in the Missionhurst Provincial Finance Committee and one term in the U.S. Provincial Council. Fr. Khonde also sat one of the board of directors for the Africa Faith and Justice Network in Washington, D.C.