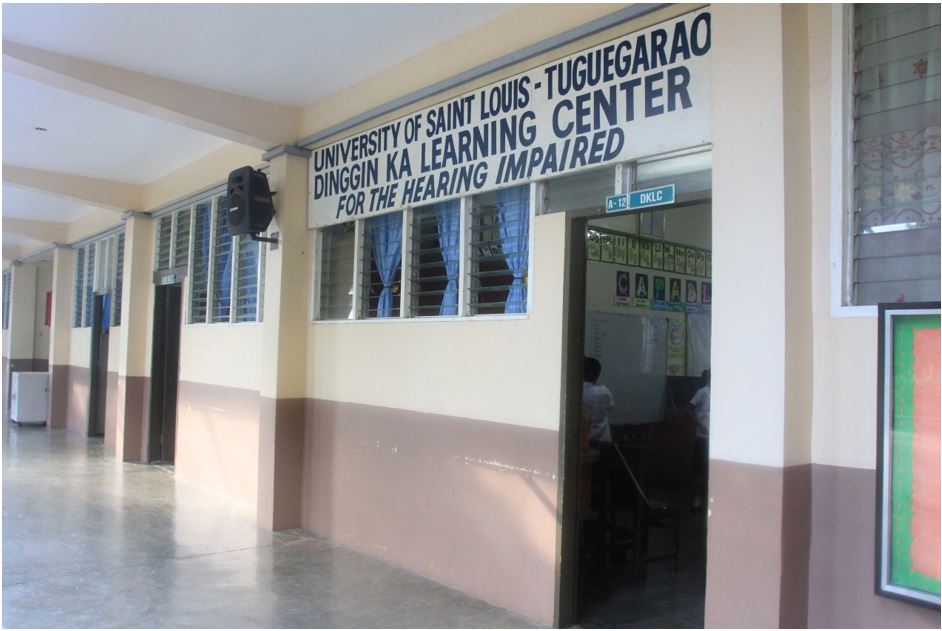 The Center opened on June 1, 1998 with the name “Learning Center for the Hearing and Speech Impaired.” The Center was renamed to its present name in 1999 by Rev. Fr. Renillo H. Sta. Ana, CICM, then chaplain of the Saint Louis College of Tuguegarao (SLCT) and current president of the now University of Saint Louis (USL).

The DKLC offers basic education for the hearing-impaired from introductory level to level 6, or kindergarten to grade 6, respectively, in mainstream grade school. The learning competencies being taught are based on the K-12 program.

Multigrade teaching is also done in some subjects depending on competencies that need to be reinforced.

The Center had only two teachers during its first year of operation: Mrs. Maria Dinky Lim and Mr. Verus Oscar Reyes. Now, it has 7 teachers including Mrs. Lim who also acts as the head.

On the Center’s second year, Ms. Rosario Bajan, deceased, was an addition to the faculty. She was sent to Australia for the needed benchmarking with Rotary Rainbow of Tuguegarao as sponsor. She later became the first DKLC head.

DKLC pupils are taught the same subjects as the regular elementary pupils in the University.

While Mrs. Lim expressed intention to conduct a tracer study on the DKLC graduates, she said some of the graduates are now professionals. One works as an image annotator in a tech company in Cavite and another is working in Manila.

“One of our former pupils was part of the team for the Study Exchange Program when he was in high school in PSD. Another former pupil is now doing well in her studies in Canada,” the DKLC head added.

Just this November, eleven (11) of the DKLC pupils joined the Tuguegarao City Meet Special Events (Paralympics), with awards in athletic events. Four of the pupils will advance to the Cagayan Valley Regional Athletic Association (CAVRAA) Meet in February 2019.

The late Reverend Father Clement Daelman, CICM, former SLCT chaplain and parish priest of Sta. Rosa de Lima Parish at Annafunan, Tuguegarao during the dedication of the Center, was among the benefactors of the DKLC. His family in Belgium sends financial assistance for the program. Other benefactors include the Rotary Club of Tuguegarao and other in-house benefactors.

Currently, tuition fees of the pupils are based on the financial capacity of parents. Aside from this, all the pupils are given free snacks every school day through the nutrition program of the University which is funded by benefactors from USA, Mr. and Mrs. Jozef Goethals.  The couple works with Notre Dame Preparatory School in Baltimore, Maryland for the program “Pasta for the Philippines” whose proceeds go to the University’s nutrition program. Said program caters to the nutritional needs of identified Junior High School students and all DKLC pupils. The DKLC pupils also receive gift items from said benefactors.

The programs “Assist-a-Day Care/ DKLC” and “Alay Pasko” have been regular programs of the University that reach out to the DKLC.

What the teachers and pupils say

On choosing to become a DKLC teacher, Mrs. Jaclyn Sacobo said she wants to encourage pupils with hearing impairment to reach out for their dreams despite their difficulties. Mrs. Minelli Mae Argonza describes teaching at the DKLC as challenging yet fulfilling and inspiring “knowing that there are learners that will be learning from the teachers.”

Asked about their ambitions, one of the pupils said she wants to be a nurse; another one to be a designer. As to how they would achieve their dreams, they replied, “Study hard.”

As message to their DKLC pupils and graduates, Mrs. Lim said, “For those who had graduated to continue reaching for their dreams with their feet planted firmly on the ground. That they will always remember that they are the models of the pupils who are still with us. For the pupils we have now – for them to be patient with their studies. There are difficulties encountered, but they must never let these challenges hinder them from achieving their goals in life. Constantly apply the lessons and values you have learned from all your teachers. Lastly, help also your Deaf brothers and sisters to become productive members of the society.”

The Center has planned several activities for November 18-23, 2018 to celebrate its 20th year. Part of the plans is to invite its graduates.