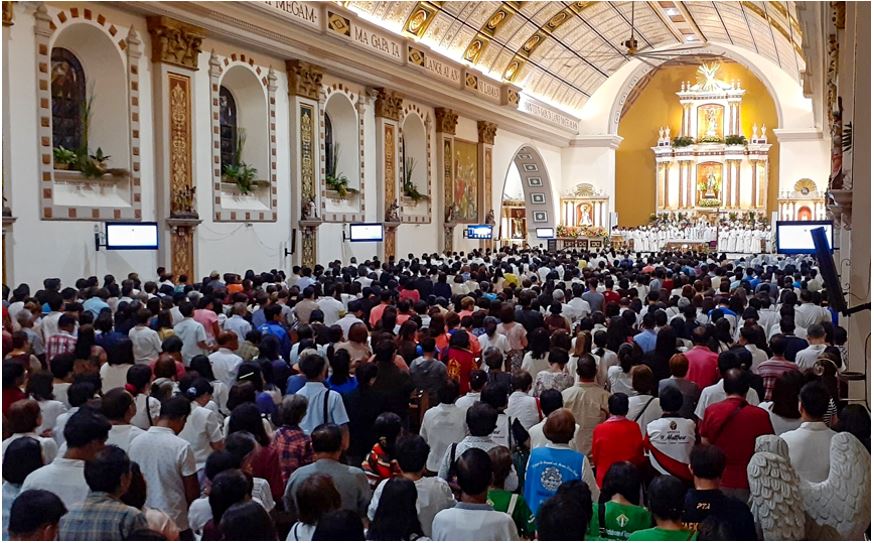 Tuguegarao City – Most Rev. Ricardo Lingan Baccay was installed as fourth archbishop of the Archdiocese of Tuguegarao, January 14 at the St. Peter Metropolitan Cathedral here.

The three-part celebration at the historic Cathedral was composed of the rite of liturgical celebration, Eucharistic celebration, and canonical installation.

The doors of the Church are considered as signs of Christ, “through which people come to God and the Good Shepherd who brings together people in one sheepfold.” 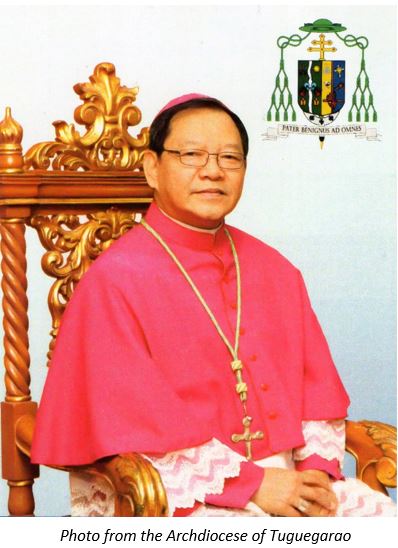 The Archbishop proceeded to kiss a crucifix presented to him, a reminder of the Archbishop’s relationship with Christ, and sprinkled holy water on himself and the people gathered at the main door, the sprinkling being a recall of baptism. Then he knelt in adoration before the Blessed Sacrament and went to the vesting area to prepare for the Mass.

The rites of reception are considered as preparatory to the celebration of the Eucharist.

The Holy Eucharist and Canonical Installation

The installation was held within the Eucharistic celebration.

The Apostolic Letter on the appointment of the new Archbishop was read in English by Msgr. Julien Kabore, chargé d’affaires at the Apostolic Nunciature in the Philippines, and then in Ybanag by Fr. Dante Manuel M. Sabban.

The rite of canonical installation ended with the homage and greeting from different groups, symbolic of the “bonds between the shepherd and his flock, and the respect and obedience the people of God ought to render the chief shepherd of the archdiocese.”

The Mass continued with the new Archbishop as the presider, the Archbishop being the “point of unity for the Church of the diocese.”

Meanwhile, Archbishop Emeritus Utleg gave the homily, providing his “unsolicited” pieces of advice to the new archbishop – advising him to walk the knife edge of a mountain and explaning the metaphor along various aspects throughout his homily. “Preach the Gospel no matter what by working for justice and peace,” he urged the new archbishop.

The Archbishop Emeritus also mentioned of the concerns of the Archdiocese that are yet to be given attention to.

“Walk the knife edge of a mountain literally,” he further advised Archbishop Baccay for health and wellness reasons.

Archbishop Baccay gave his message before the concluding rite of the Eucharist. He thanked His Holiness Pope Francis, Msgr. Kabore, several bishops and other clergy, individuals and groups, and his family, relatives and friends.

“I ask you to pray for me as I exercise my being a father to you all,” he appealed, recognizing the intercession of the Blessed Virgin Mary of Piat whom he called “Yena tam Ngamin” (Our Mother). “Be assured that I will do my best to serve you all to the exclusion of no one.”

The clergy, religious and lay people attend the Eucharistic Celebration and Installation
of Most Rev. Ricardo L. Baccay at the St. Peter Metropolitan Cathedral.

Archbishop Baccay was born in Tuguegarao City where he also attended his grade school. Called to priesthood, he attended the San Jacinto Seminary in Peñablanca, Cagayan, and further the University of Santo Tomas.

He was ordained priest in 1987 at the St. Peter Metroplitan Cathedral. He had various assignments in the Archdiocese of Tuguegarao from 1987-2016 such as Catechetical director; parish priest of certain parishes in Tuguegarao and in Solana, Cagayan; rector of the San Jacinto Seminary; and overall director of the Commission on Christian Formation.

In 2016, he was appointed as third bishop of Alaminos, Pangasinan.

He also has held various assignments in the Catholic Bishops’ Conference of the Philippines (CBCP) and presently the Regional Chairman for Youth; Chairman of the Episcopal Office on Bioethics; and Regional Representative of the Northern Luzon CBCP Permanent Council.

His Holiness Pope Francis appointed Most Rev. Baccay as Archbishop of Tuguegarao on Oct. 18, 2019.

Archbishop Baccay’s episcopal motto is Pater Benignus ad Omnes (The Father is kind to all) with reference to the nature of God. The motto appears in the Archbishop’s coat of arms.

He uses the pastoral staff or crosier first used before by the Most Rev. Constant Jurgens, CICM, former bishop of Tuguegarao.

As head of a Metropolitan Archdiocese, Archbishop Baccay serves the province of Cagayan and oversees the bishops of Batanes, Ilagan, Bayombong, and Tabuk.

The diocese of Tuguegarao was established in 1910 and elevated as archdiocese in 1974. The St. Peter Metropolitan Cathedral is the seat of the Archdiocese.