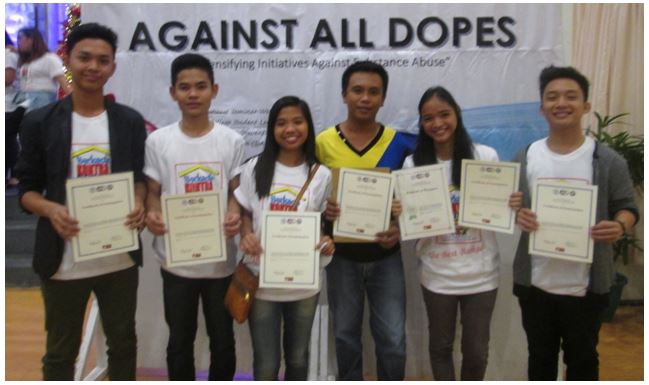 To continue upholding one of the University’s core values – Social Awareness and Involvement, the University of Saint Louis, through the National Service Training Program (NSTP), sent five of its students and one faculty member to represent the University in the National Seminar-Workshop on Drug Abuse Prevention and Education (DAPE) held at the Venus Parkview Hotel, Baguio City, Dec. 9-11, 2015.

During the seminar-workshop, resource speakers from the Dangerous Drugs Board (DDB), Philippine Drug Enforcement Agency (PDEA), and the Association of Advocates Against Drugs (A³D), Inc. talked about various topics, namely: Government Policies and Programs on DAPE; The Philippine Scenario on Drug Abuse (Situation and Statistics); Laws and Social Legislations on Drugs in the Philippines; and the Psychological, Physical and Medical Effects of Dangerous Drugs.

Key points from the lectures include: the national drug abuse situation 2008 survey which recorded an alarming 1.7 million dangerous drugs users; the R.A. 9165 which is an act instituting the Comprehensive Dangerous Drugs Act of 2002 and aims on the implementation and enforcement of anti-drug abuse policies and programs; and the harmful effects of drug abuse which are generally focused on the emotional stability of the user.

Meanwhile, included in the seminar-workshop were the On-the-Spot Essay Writing and Poster-Making Contests which tested the writing and visual skills of the representatives of the different participating schools in interpreting the theme: “Kaya ko ‘to ng walang droga.” Among the participants of the contests, USL team soared as Castro won second place in the Essay Writing while Maranan outdid the other artists in the Poster-Making, garnering the first place.

The works of Castro and Maranan will be included in the compilation of the winning pieces starting from the first run of the seminar, since according to the organizers, the top three entries in both competitions were gathered and shall be used in other activities that will be established by them.

The seminar-workshop was already the seventh run succeeding other six runs held in the different parts of the country in line with the aim of DDB, A³D, and the Commission on Higher Education (CHED) to continue promoting, especially in the youth, the advocacy campaign against dangerous drugs.

Dr. Adelaida Fronda, President of the A³D Inc., ended her message emphasizing the DDB’s “Kaya ko ‘to ng walang droga” campaign and thus challenging the student leaders and young advocates to circulate in their respective universities and towns the aspects of DAPE and the key points they learned from the lectures.

Moreover, Dr. Fronda also advised the participants to propagate and develop the ideas formed during the event into things which would contribute to the fulfillment of a drug-resistant and drug-free Philippines.

The seminar-workshop carried the theme: “Against All Dopes: Intensifying Initiatives against Substance Abuse.”